Learn about Native American nations and tribes, customs and manners, myths and legends, and daily life in olden times for kids and teachers. 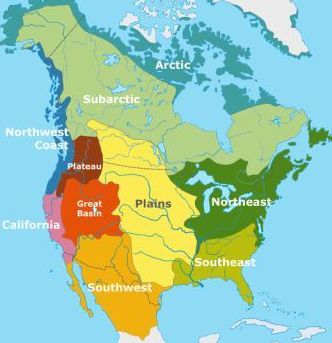 Nez Perce and many other tribes

Native Americans in US, Canada, and the Far North

Early people of North America (during the ice age 40,000 years ago)

Southeast Woodland Tribes and Nations - The Indians of the Southeast were considered members of the Woodland Indians. The people believed in many deities, and prayed in song and dance for guidance. Explore the darkening land, battle techniques, clans and marriage, law and order, and more. Travel the Trail of Tears. Meet the Muscogee (Creek), Chickasaw, Choctaw, Mississippians, Seminole Indians and Cherokee Indians.

Plains Indians - What was life like in what is now the Great Plains region of the United States? Some tribes wandered the plains in search of foods. Others settled down and grew crops. They spoke different languages.  Why was the buffalo so important? What different did horses make? What was coup counting?  Who was Clever Coyote? Meet the Blackfoot, Cheyenne, Comanche, Pawnee, and Sioux Nation.

Southwest Indians - Pueblo is not the name of a tribe. It is a Spanish word for village. The Pueblo People are the decedents of the Anasazi People. The Navajo and the Apache arrived in the southwest in the 1300s. They both raided the peaceful Pueblo tribes for food and other goods. Who were the Devil Dancers? Why are blue stones important? What is a wickiup?  Who was Child of Water?

Pacific Coastal Northwest Indians - What made some of the Pacific Northwest Indian tribes "rich" in ancient times? Why were woven mats so important? How did totem poles get started? What was life like in the longhouse? What were money blankets and coppers? How did the fur trade work? How did Raven Steal Crow's Potlatch?

Inland Plateau People - About 10,000 years ago, different tribes of Indians settled in the Northwest Inland Plateau region of the United States and Canada, located between two huge mountain ranges - the Rockies and the Cascades. The Plateau stretches from BC British Columbia all the way down to nearly Texas. Each village was independent, and each had a democratic system of government. They were deeply religious and believed spirits could be found everything - in both living and non-living things. Meet the Nez Perce

California Indians - The Far West was a land of great diversity. Death Valley and Mount Whitney are the highest and lowest points in the United States. They are within sight of each other. Tribes living in what would become California were as different as their landscape.

Native Americans of the Far North: What trick did the Kutchin people use to catch their enemies? How did these early people stop ghosts from entering their homes? Why was the shaman so powerful? What is a finger mask? Play games! See and hear an old Inuit myth! Enter the mystical world of the people who lived in the far north in olden times. Algonquian/Cree, Athapascan/Kutchin, Central Canada, Inuit, The Shaman

The Importance of Baskets

Many Types of Homes